With Orlando being our home town and a camp we have help organized for years, you know we went all in.

This years WordCamp Orlando was Superhero themed. This was an exciting excuse to help discover a couple wapuus that where heavily influenced by some of our favorite heroes from both Marvel and DC with our own flare on the Wapuu hero along with some designs that are completely unique vigilantes. 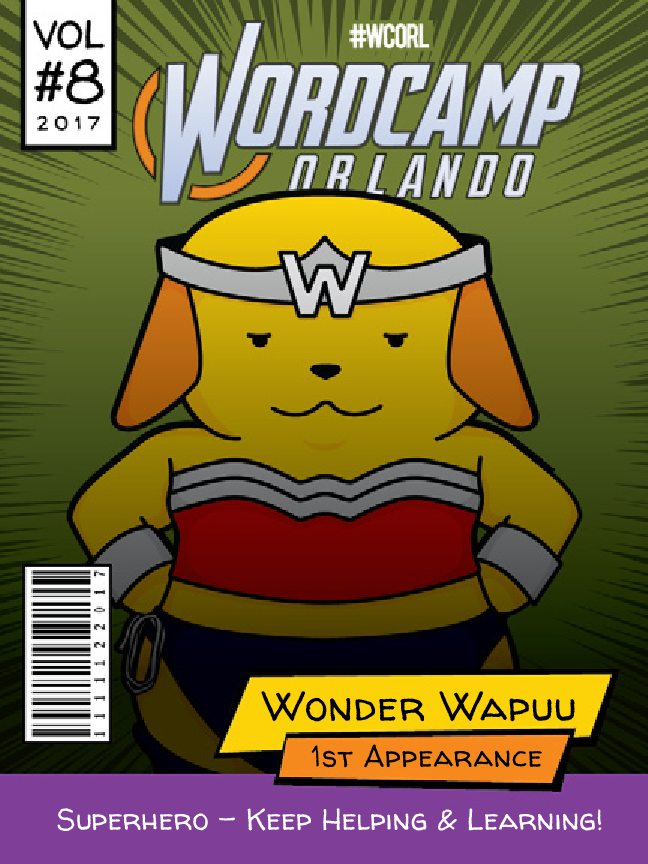 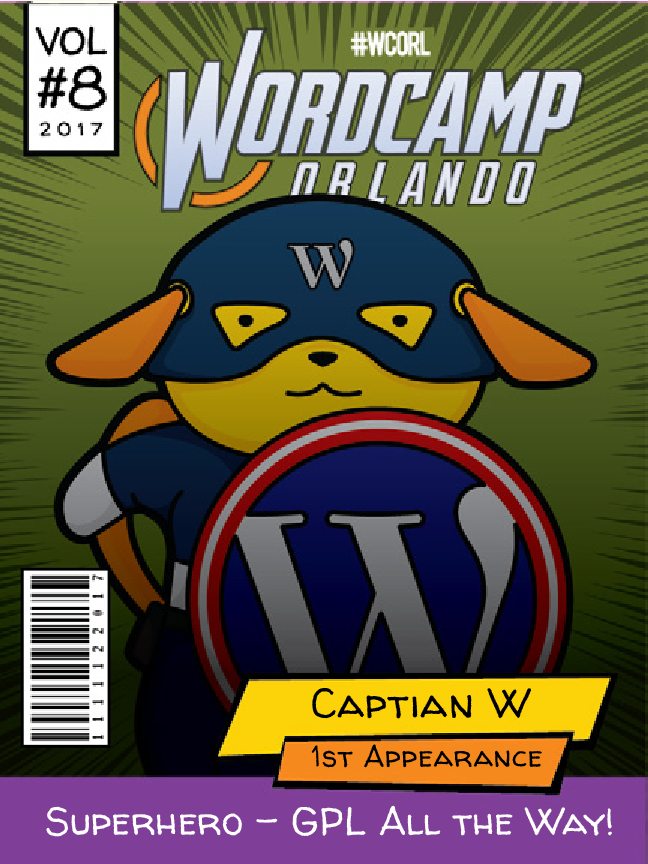 Tagline: “GPL All the Way!”
Weakness: “None Open Source Software”
Influence: The WordPress logo does scream shield, and who has the best shield? Captain America. 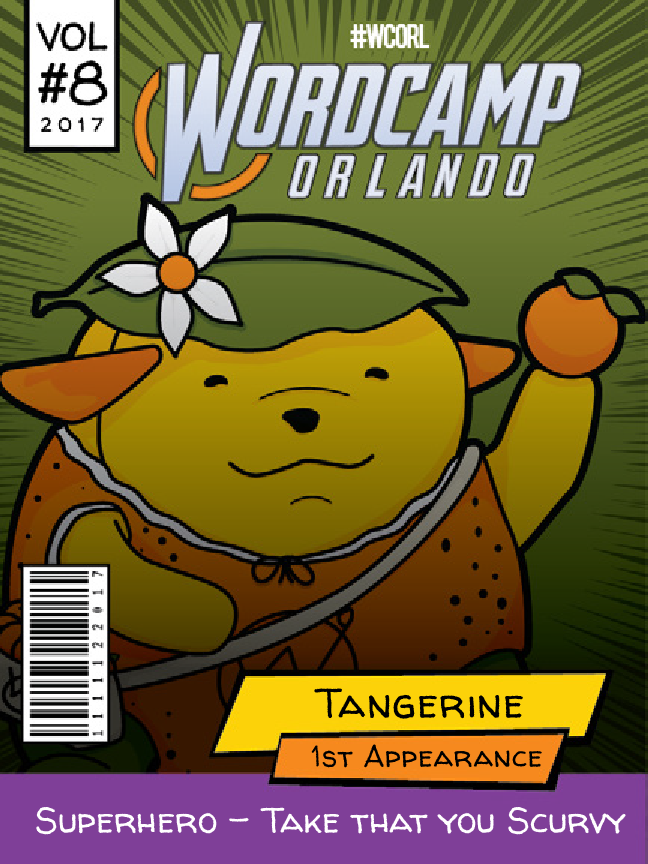 Tagline: “Take that you Scurvy”
Weakness: “To much concentration”
Influence: Every year we have been including an orange into our logo. We did do that but it was very subtle, then made Tangerine to make it obvious. 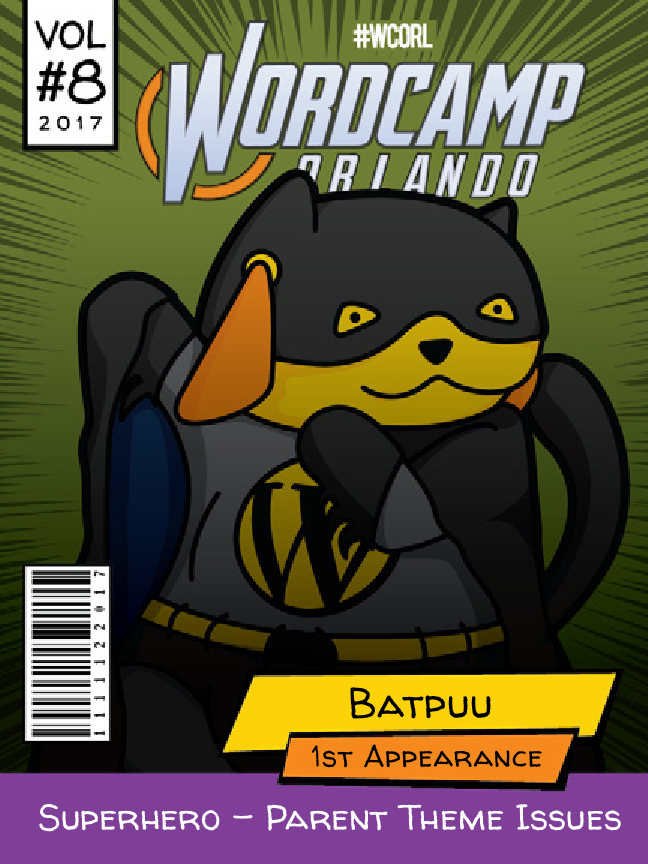 Tagline: “Use WordPress”
Weakness: “Parent Theme Issues”
Influence: This is actually a reimagine an already existing Bat Wapuu. We changed his style a little and changed his name to Batpuu. This could very will be a 2nd Bat based vigilant. 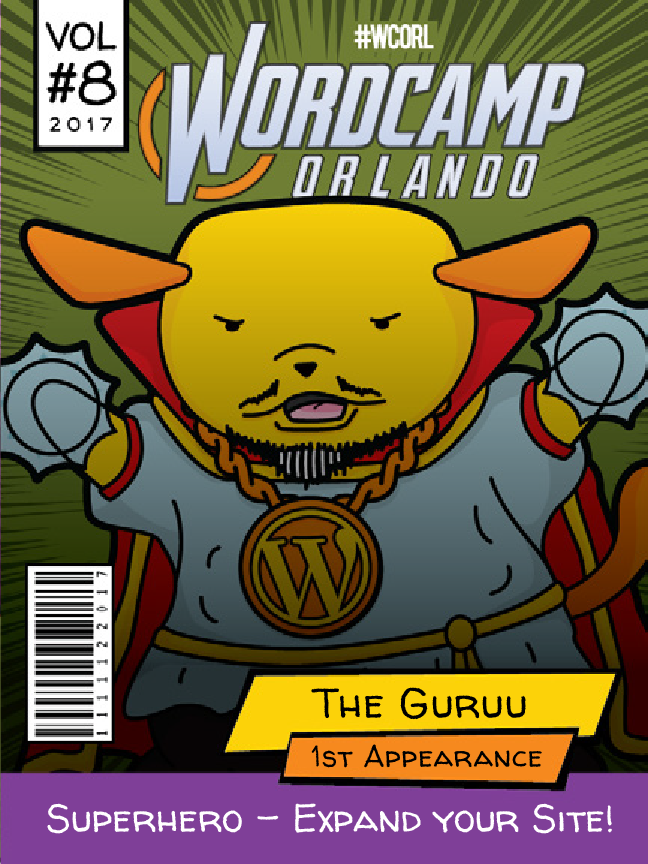 Tagline: “Expand Your Site!”
Weakness: “He is short tempered”
Influence: “If WordPress was a religion he would be their pope. Wanted to be a little spiritual about it like a Guru but also have powers like Dr. Strange.”

You can have heroes with out villains, but we call them “The Misunderstood”. In fact the villain where easy. We have a whole roster we never even got too. All the villains listed below are issues more WordPress developers face when first starting out. 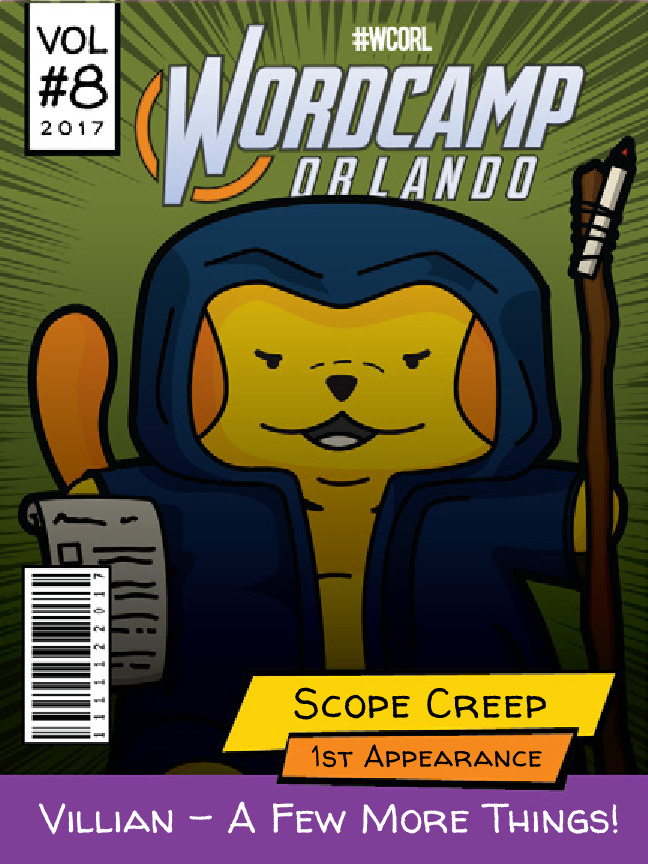 Tagline: “A Few More Things”
Weakness: “A good budgeted Project”
Influence: Whats him to be a short mouth breather that larks around. Slightly influenced by the emperor from Start Wars. 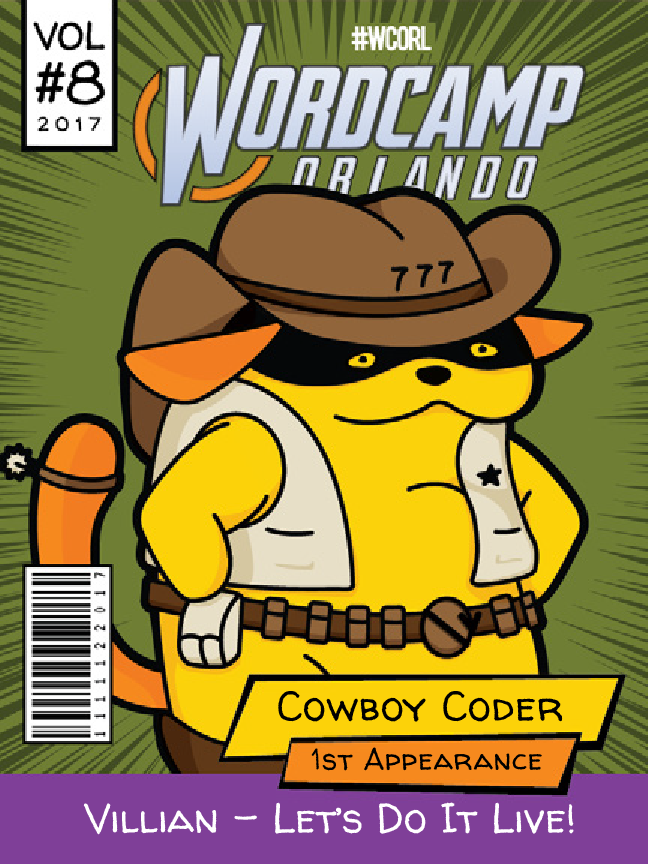 Tagline: “Lets Do It Live”
Weakness: “Staging Environments”
Influence: “This one should be obvious. He’s a Cowboy and a bad guy because he has a mask on. The 777 on the hat does not mean good luck. Its a reference to file permissions. There is also a don’t backup icon on his belt buckle. 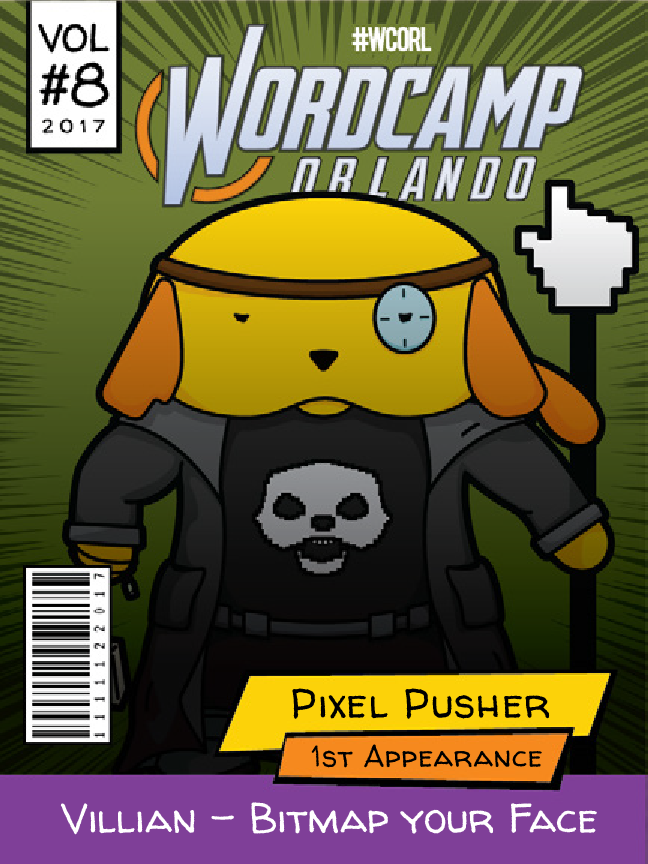 Tagline: “Bitmap Your Face”
Weakness: “Independent Thinkers”
Influence: If you can’t tell by the pixelated wapuu skull on the shirt, this little fella was inspired by the Punisher and old school design. The Eye curser and the pointer staff are form old Photoshop. Also think about what it would feel like to be smacked with that old square mouse. No thanks! 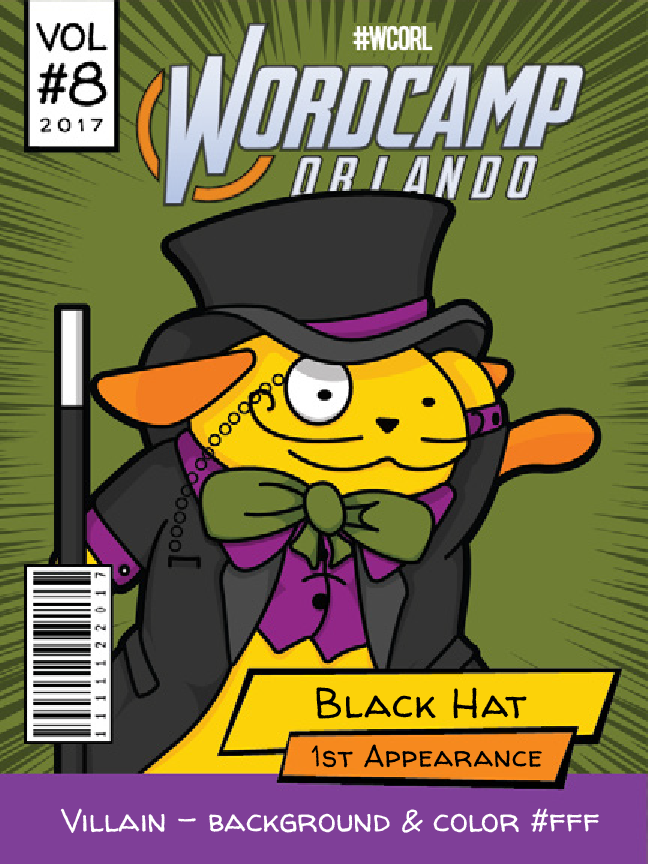 Tagline: “No, It’s Fine”
Weakness: “Spam filters & Advances Google Bots”
Influence: “A looks a little like Dick Dastardly and Snidely Whiplash and sounds a lot like Snagglepuss. He is always messing with his mustache and thinking of ways to do it easier rather then the ” 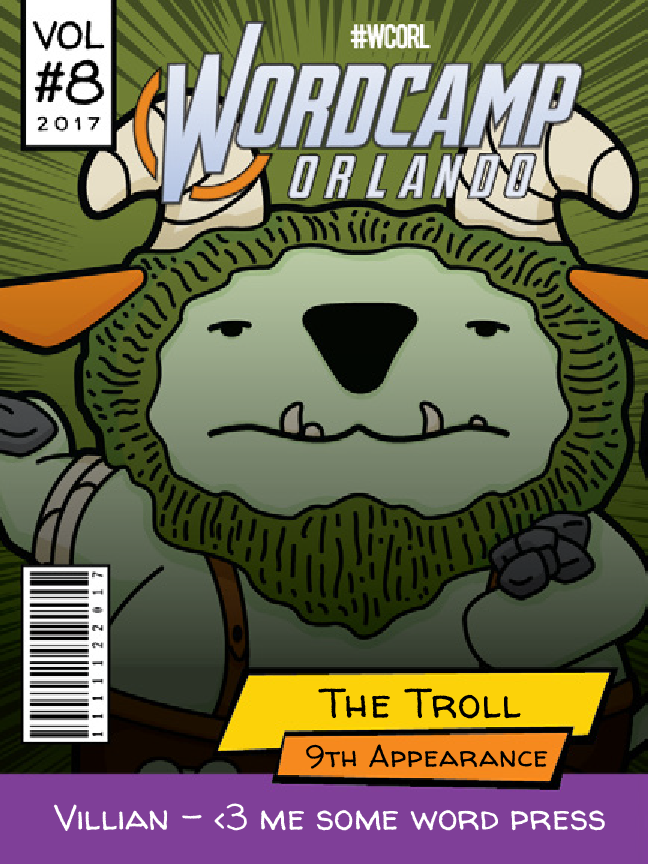 Tagline: “<3 me some word press”
Weakness: “hugs”
Influence: “We wanted to make a new species that looked like a troll but still had influence of a wapuu. Things like the mouth, eyes and nose shape regardless of size. Same things with the ears an tail. Even though the tip of the tail has fur. The troll also throws stones, because you know what they say about wapuus who live in glasses house, right?”

They soldout again this year. Hope you have a chance to go. Be on the look out for a upcoming blog post about all the swag we help design. Also, come and find us at WordCamp US 2017 for some Wapuu pins if you miss out! 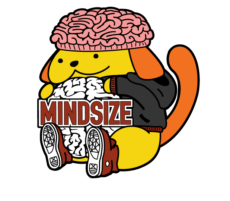