Our Lead Ambassador, James Tryon(Me) happens to also be one of the co-organizers of WordPress Orlando Meetup Group. Why does that matter you might ask? It doesn’t, besides Orlando was lucky enough to start their year off with an open Q&A with the co-founder of WordPress itself, Matt Mullenweg.

This would give me a chance to do two things; ask Matt some tough questions that have been on my mind about Gutenberg(among other things), and get Matt to re-sign my quilt. But that is a different story for another time.

I had several questions about Gutenberg but felt it was best to ask them in front of everyone. For a nice recap Check out Data Driven Labs post. – Thanks for a nice write-up Sandy Edwards.

As everyone was standing around having some snacks – waiting for the Q&A to start, I wanted to say hi to Matt. He complimented my shirt and said “nice pins”; but more on that later. It was kinda funny and worth the read.  Anyways, after that awkward moment, I had a chance to ask a pre-group meeting question. It kinda fits the topic of the pin story.

Here is a word for word recap of the short interaction

James – “The fact that wapuu has been around for almost 7 years now, What would it take to make wapuu the “Official” mascot of WordPress?”

Matt – That’s a good question, and I never really thought about it. Wapuu, not something I would have ever done but does now that it’s a part of the community I do like wapuu.

Matt – But why, there is no competition?

James – “Will… Then Wapuu would be the Official Mascot for WordPress.”

His answer surprised me for sure. It’s definitely not what I expected. After thinking about it more I think I agree…

Sure, it would be fun to say wapuu is “official” mascot, but not at the sacrifice of the spirit of our beloved wapuu. We want our community to continue to embrace their own wapuus however they want without restrictions.

Let’s all agree that Wapuu is the Official Unofficial mascot of WordPress.

We are super grateful for Matt spending some time with us at our Orlando WordPress Meetup. It was also nice to ask him a question that has been on my mind for a couple years(was waiting for the right time). 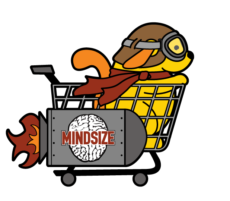